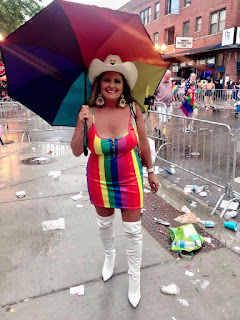 June was Pride month. I was lucky to be in Chicago for their Pride Fest and Parade on Sunday, June 30th with three of my children and a few of their friends.

A few days before leaving for Chicago, I was in my bathroom trying on a few of the Pride/rainbow items I found online and Alexis, my 17-year-old daughter was sitting in the bathtub (she often does this when I'm in my bathroom getting dressed - she sits in my large, whirlpool bathtub and watches/talks to me). As she was watching me, she snapped a picture of one of my outfits to send to her sister.

I thought she was being sarcastic. I said, "Really?"

She said, "Yes. Just the fact that you care enough to participate by wearing rainbow colors, by going to Pride parades with your kids, it's cute, it's good."

We went on for a bit discussing that and she said, "I have friends who have come out as gay whose parents are not supportive. It's good that you're so supportive."

When I was at the Pride Parade on the streets of Chicago with a reported one million other participants and supporters, I was approached many times by people complimenting my outfit, wanting to take pictures with me, people grabbing me and enthusiastically and lovingly including me in their celebrations. I'm often all about dressing up for occasions (4th of July, Halloween, Memorial Day, Women's Marches, etc.), but I wouldn't dress up and participate in any event I wasn't actually emotionally, mentally or happily invested in, and Pride was and is no different. I wore rainbow colors to not only fit in, to BE a link, to be supportive and interactive - I wore rainbow colors because I am a proud mother of a lesbian daughter and a transgender son, a proud person that supports, depends on and relishes diversity in our society, and a woman who prides herself for being on the right side that is often so wronged. And, I proudly consider myself a part of the LGBTQ+ community. 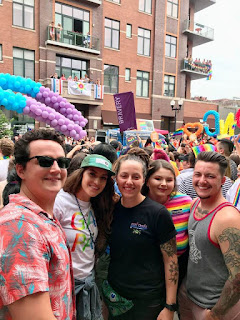 My children sometimes tire of my flamboyance, I know this. I sometimes tire myself. But ... when I was in Chicago, in our AirBnB and trying to decide which outfit to wear (should I wear the thigh-high boots I brought? should I wear the rainbow corset? should I wear the rainbow dress? should I just wear the sweat pants with the rainbow stripe on the sides with a white T-shirt? ...), worried a bit that I might be too flamboyant, worried that I might embarrass my kids, worried that I wouldn't fit in ... my youngest daughter said, "Wear the boots. Wear it all. If you're going to go, go big!" My other daughter said, "Wear whatever you want, Mom." I chose the dress over the corset, and the thigh-high boots and a cowboy hat with a rainbow-heart sticker I put on it. When we left the house, I sort of looked for signs from my three kids - signs of embarrassment, signs of discomfort, signs of anything. All I noticed was they treated me as they always do - with acceptance. I was just an extension of their own diversity; nothing odd or ridiculous. They are used to me (and my clothes), of course, but maybe, they view me as a part of the reason they are able to survive happily and gracefully - me and my willingness to step out in the world, vulnerable, not truly knowing that I will be accepted. Maybe.

I've been told in my life pretty often that I have a "freak flag" (noun: used in reference to the open, proud, or defiant exhibition of traits regarded as unconventional.) I never seem hesitant to fly, and that is partly true. I think it is because I have never quite fit in. You just know when you fit it and you know when you don't. Somewhere along the way I realize that what people tried to define "wrong" with me, were the things I liked best about myself, and, so, I nurtured those parts of myself, embraced them and often wave my flag to define them, even if flying that flag made/makes people uncomfortable, makes me uncomfortable.

Dressing for the Pride Parade was my way of flying my own flag, but more importantly, it was my way of helping to draw attention and offering recognition to their lives, their worth, their flag. I think I did that. 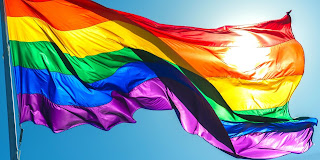